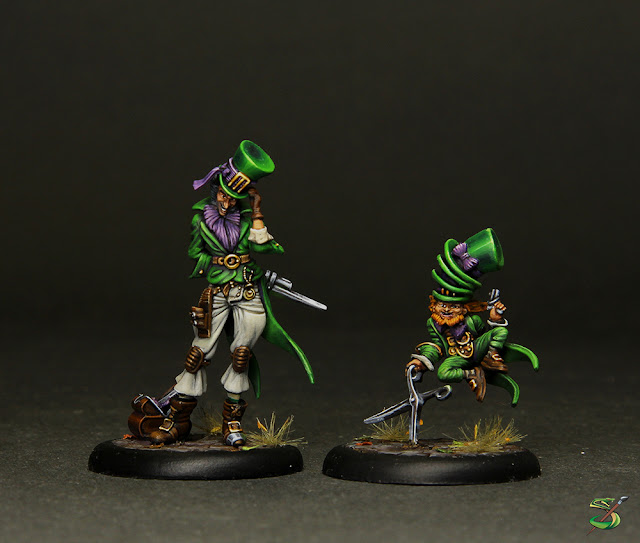 Some Irish sense in Malifaux Monday!
As soon as I had the opportunity to paint Seamus and his totem, I immediately decided that the Copycat Killer would be painted like a leprechaun.
Later, when I started working on Seamus, I also decided to make it more "Irish". For this, I made a green suit and hat. But I did not make him redhead, because it would destroy his image as serious gentleman (and mad serial killer of course)

Read more »
Posted by Ravenswood at 23:23 No comments: 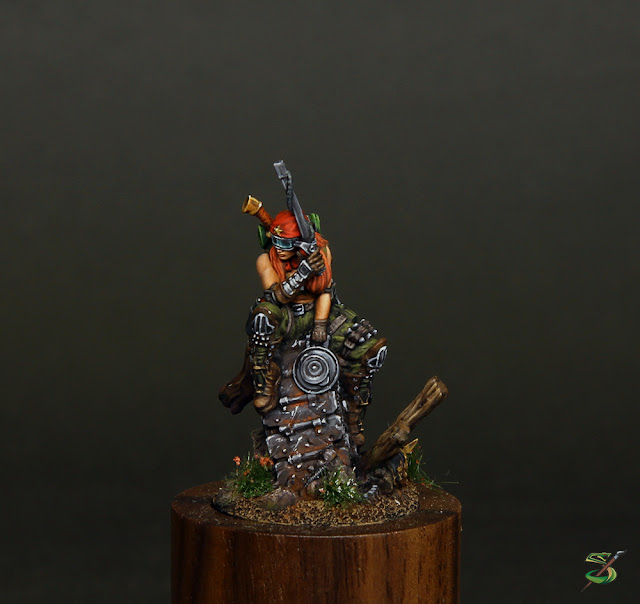 One more metal mini from Raging Heroes TGG series now painted. She was part of my display on Duke of Bavaria painting competition with Iron Warriors Praetor Tribune and Chaos Renegade and I very happy to won the bronze medal on this tough contest.
I enjoyed to remember old tricks and do something new while paint this one. Hope you also enjoyed the result.
This mini is for sale now

Read more »
Posted by Ravenswood at 16:35 No comments: 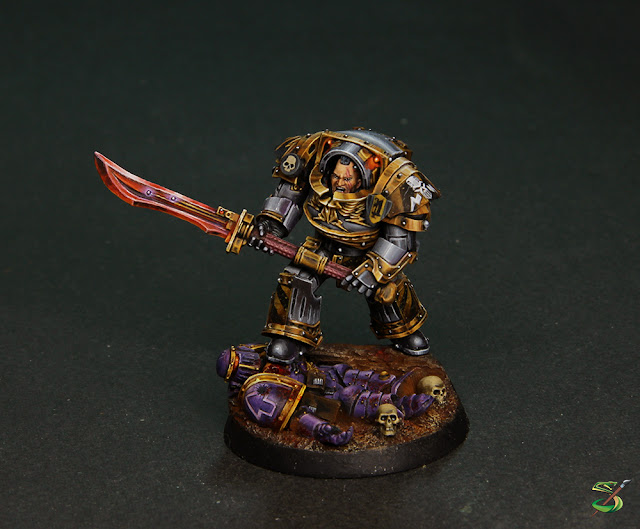 I am very glad to introduce to you the final result of my Praetor-Tribune project. I got a lot of fun while painting this miniature and tried ti share to you all this project's experience.
Also this project inspired me not only to do more Iron Warriors characters but also do a some Emperor Children project too.

Read more »
Posted by Ravenswood at 19:28 No comments:

New Kingdom death pinup girl named Survivor. I like so much to paint her. And hope to do a 2nd version of this miniature with some different details and of course with a new color scheme.
For this version I took green-purple-orange color triad. And did more complex mixes based on this colors. Dark skin tone from black-purple mix to orange (Ratskin Flesh). Purple hairs. Unsaturated emerald green for cloths (ha-ha-ha!), necklace and patina. 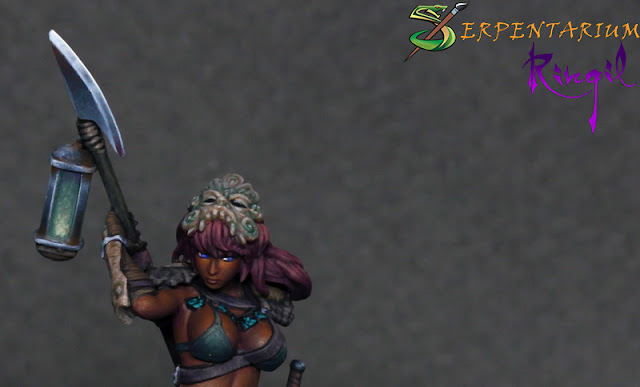 In the last part of the project, I will touch on one more important focal point of the our praetor miniature, which is the sword. I decided to do his blade is bright red and very contrast both in light and in color. This scheme is very similar to the one I used when painting crystals on the Demonsmith's base last year, but it has some changes. 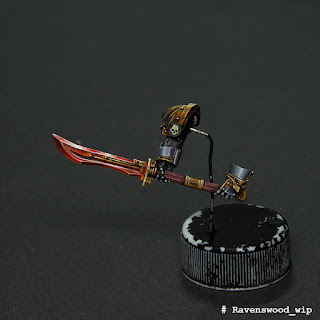 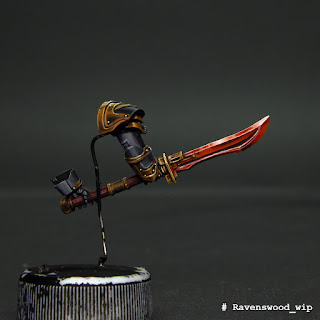 Firstly, I finally bought my favorite Basic Red from Andrea Color (and a few more of their colors), which I'm incredibly happy with. And secondly, the shape of the blade forced alternating two variants of red, to achieve greater contrast.

I note that from the point of view of the display light and color on the blade a certain number of errors are allowed. But they are made deliberately to increase the contrast between the surfaces. In addition, after a series of tests, it was decided to abandon the glowing stones on the blade and reduce the OSL effect a minimum (because of which it was half repainted one hand)

The Light. Here everything is standard, as for the previous parts. First I chose the place for the main highlight and made a shadows, midlights, additionals light and reflexes. The most important of which I proceeded - with fracture surface should be strong contrast. This visually emphasizes the shape and along with the color makes the blade of the sword a focal point. 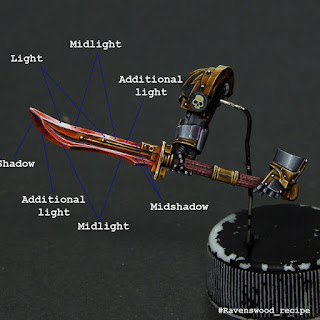 Colour. When working with the blade, in addition to the contrast of light and shadow, I decided to add a color contrast between the surfaces. The brightest part will be cold red (due to white), the second - a warm yellow-orange. You can notice that one of the surfaces is partially made in one grade, partly in another. In this case, I sacrificed "correctness" for the sake of greater contrast and dramatic effect. 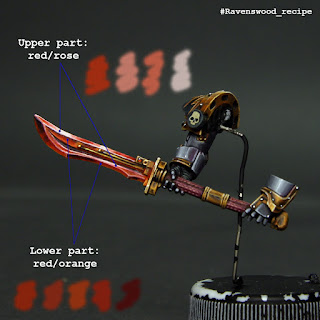 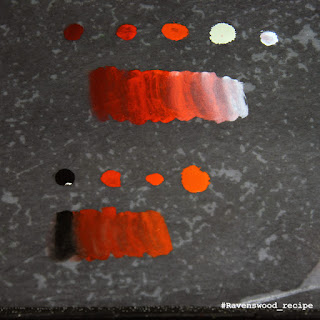 As the base color for the "cold" part, I used Dark Red (Andrea Color) sequentially flashed through pure Basic Red (AC) to Scarlet (VMC). For final highlights and highlights, I used a mixture of Scarlett and Pearl White (P88), which gradually added white. In addition, as far as highlighting, I periodically made Basic Red frosting to keep a cool red tint. 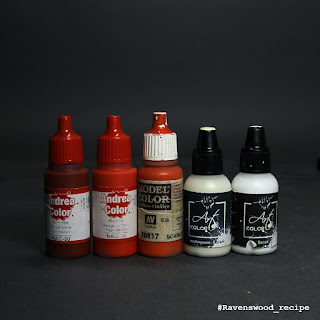 The base color for the warm part was a mixture of black and Dark Vermillion (VMC), which was consistently bleached from the beginning to the pure Dark Vermillion, and then to Scarlet. The final highlightings were made by a mixture of Scarlet and Amarantha Red (both VMCs). 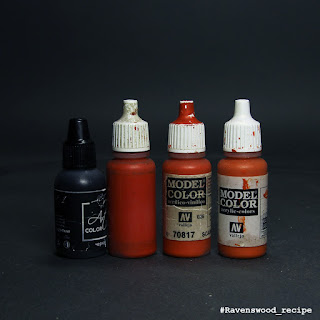 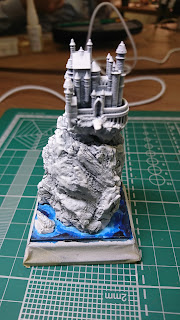 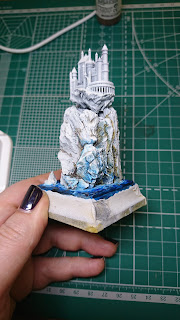 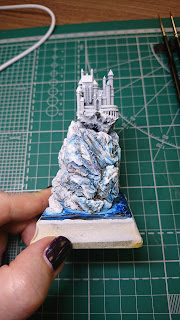 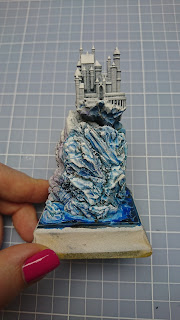 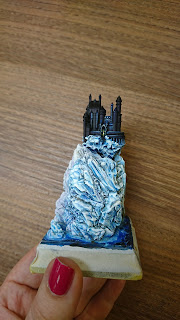 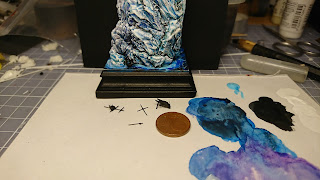 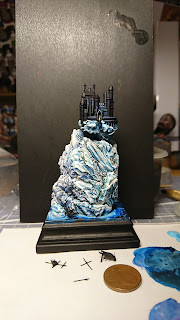 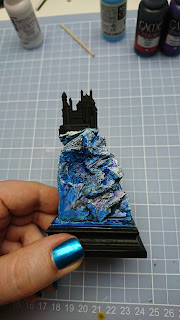 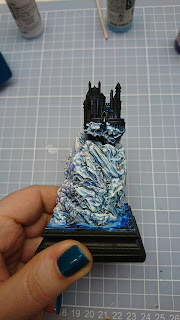 [EN] Actually, I finished painting this part of the diary another two weeks ago, but there was no time to describe the process, so I decided not to divide the text into several parts.
So, if someone else remembers, I stopped on a miniature ready for priming. Reflecting on the general idea of work, I thought that the rock on which the castle stands is too boring. Better let it be a huge iceberg. The miniature was primed white, and then I started from the base colors under the waves. The colors are quite bright and contrasting because water will be added from above and base colors must be visible through it to sense the volume of water.
Next, I began to paint the old, slightly dirty ice of the iceberg. The higher, the purer and lighter it becomes. White, black, dark blue, blue, purple and brown were used. All VMC range. If you look closely, on a small iceberg you can see a flock of penguins...
Almost finished with the frontal part of the iceberg, I became bored again. A light iceberg and a light castle merge, and the focus point are lost. It was necessary to do something with the castle, and Marina suggested painting it in a radical black color. I tried it, and I really liked the idea. The black castle echoes with the black base and looks quite unexpected, and I want to achieve this effect.


Also, I wanted to add a few flooded, broken sailboats from the bottom of the iceberg. Given the scale, it was not possible to find the ready ones, so I made them from plastic and wire. The place of flooding changed several times and at the current moment all parts of the ships saved in a box and wait until I finish with the base of the iceberg and go to the water. 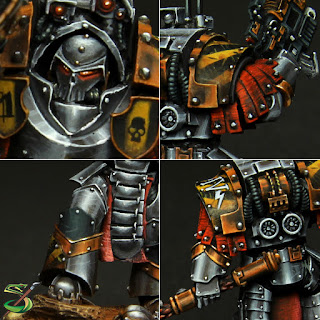 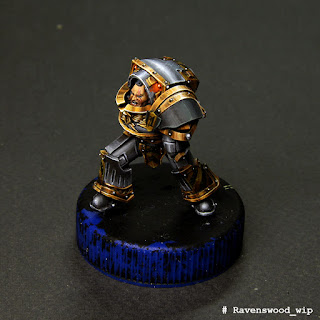 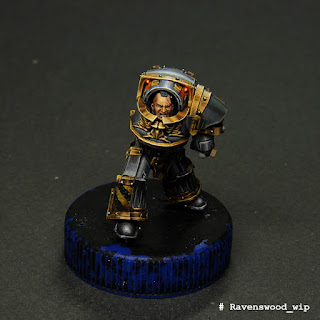 Read more »
Posted by Ravenswood at 13:14 No comments:

This is the second version of the painting of this wonderful bust. The work went on for a long time (almost a year) with large interruptions and with a complete repainting several times. The image was still not born. There was some vague idea about tattoos on the hands and a T-shirt with a logo, but somehow it did not work.
At some point, I decided to experiment with gold leaf (it was a big quest, where to get a small piece of this thinnest foil, and do not buy a thick folder with a lot of sheets). Around the same time, I revised the "Fountain" Darren Aronofsky.This film impresses me so hard. I watched it three times already, and every time it opens up on new sides. I am very touched by the story of the protagonist - about the inability to cope with death and acceptance of its human limitations. Plus it has a very rich symbolic material. And this gave me the inspiration to remake the bust once again, using some details from this story. 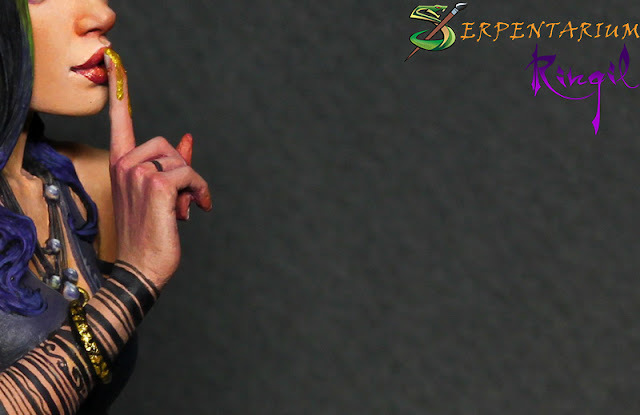 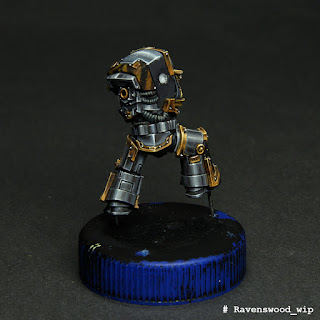 n this part I will tell you a little about how the steel HMM was made. The basis for this I described in a short article for Figure Mentors Magazine (http://figurementors.com/step-step-guide-painting-nmm-beginners-sergey-gybin-aka-ravenswood), now it's possible to describe it a little more. Consider the color scheme in terms of two parameters: the lights and the colors. 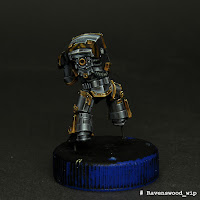 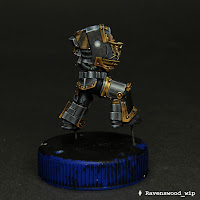 Read more »
Posted by Ravenswood at 22:07 No comments: